In recent years, with the development of science and technology, more and more effects have been designed to abandon Cab Simulation and use IR instead.
Let's talk about the cab simulation and IR stuff today.

With a signal that time approaches to zero and the signal approaches infinity (commonly known as a pulse, it is also known as an impulse response), a system is used to measure his output. The frequency response of this system can be obtained by converting this result from the time domain to the frequency domain using the Fourier transform.

The impulse response intuitively reflects the manifestation of sound in our life world. Literally, impulse response is a response to "shock", it sounds very mysterious, and it's not complicated to put it in perspective. Let's explain it in a popular way.

Suppose a musician is in a room. He wants to know the sound characteristics of this room. What is the easiest way? 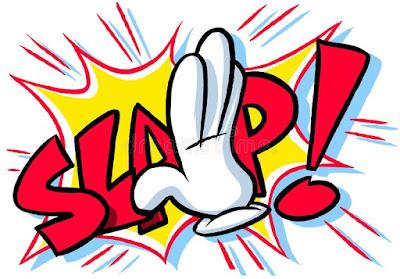 Slap the hand, and then listen to the room's response,you could basically understand it. This process is the simplest method of obtaining impulse response. The slap time is very short and can be as an impulse signal. The following reverberation is the acoustical property of the room and the impulse response of the room. Performing a performance in this room is equivalent to performing a convolution operation with the musician's performance using this impulse response data.

The length of IR is an important parameter.
The reverberation of a concert hall is often tens of seconds. If we want to express the reverberation characteristic of this concert hall, we must obtain at least a dozen seconds of impulse response. Convolution with these tens of seconds of impulse response is a very large number of operations (usually requiring millions of operations), even if it is difficult to achieve the real-time performance of the acoustic characteristics of the concert hall with current technological level.

The length of an impulse response is usually expressed in two ways, like our time value above and another point value (samples). The point value and the time value can be converted to each other. For example, the sampling rate of the effector is 44.1 KHz. Then a 2048 point impulse response data is equivalent to 2048 x (1/44100) = 46 ms.
(Note: Fractal Audio's Normal mode is 1024 samples, 20ms; Fractal Audio's HiRes mode is 2048 samples, 40ms.) 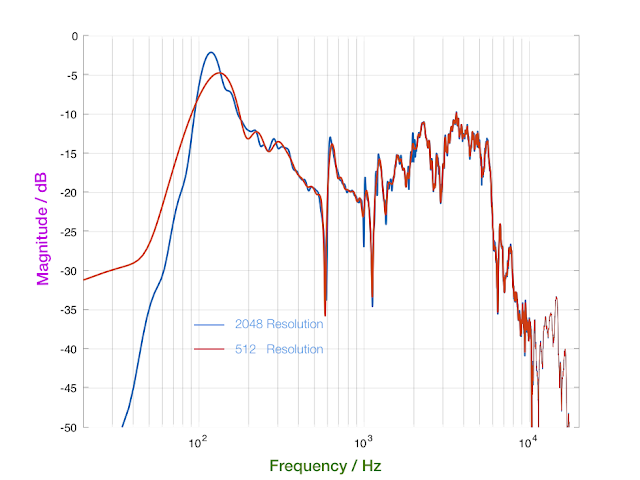 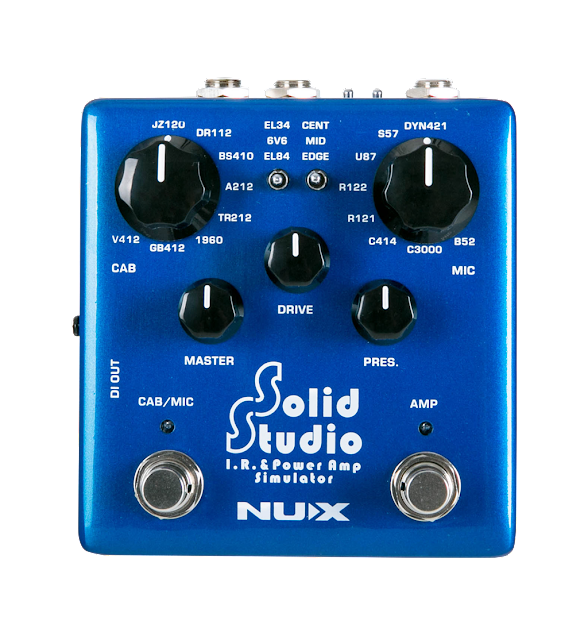 What is system latency?
System latency is another important parameter of hardware, which reflects the response speed of the hardware system to the signal. System latency plays a crucial role in the musician's performance. If the delay is too long, then the sound heard by the human ear will lag behind that of the hand. Professional musicians will experience discomfort with system latency higher than 5ms, and the sound will be soft. In fact, because the played sound cannot be transmitted to the ear in real time. It is not conducive to the intensity of hand control tone.
The system delay can also be converted into the distance from the source to the ear. The speed of the sound is 345 m/s. The delay per millisecond is equivalent to 0.345 meters. Assume that the musician's ear is 1.5 meters away from the speaker, and the space delay is nearly 5ms, so the lower the system delay, the better the force control. 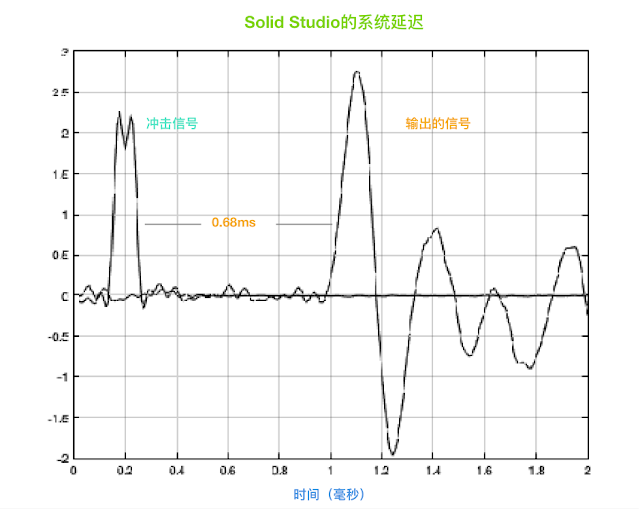 The figure above shows the actual system latency characteristic measured by Solid Studio. It can be seen that only 0.68ms, which is the distance of 20cm, is even shorter than the physical distance that the guitar string is directly conducted to the ear, thus maximally avoiding the influence of the system on performance.
However, to achieve a very low system latency requires strong system computing power to support, due to the natural properties of the digital system, the sample rate will directly affect the system delay. For example, the commonly used 44.1KHz sampling rate sampling time interval is about 22μs (microseconds), if you use ordinary DSP and AD / DA converters usually take at least 100 sampling time to process data, so most of the Digital hardware is higher than 2ms system latency.
Solid Studio uses oversampling technology, which is to increase the system sampling rate to 88.2KHz, so that the sampling interval is reduced to 11μs (microseconds), coupled with the industry's top TI 6720 floating-point DSP and the latest generation of AKM professional AD / DA Converters surprisingly shorten the time needed to buffer to less than 1 millisecond. 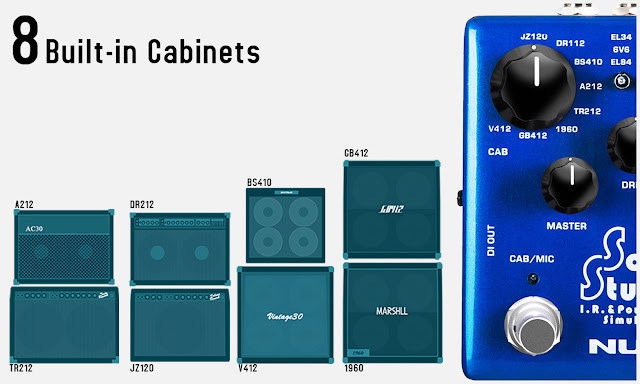 Solid Studio comes with 8 classic cabinets:
Roland JC-120, Fender Deluxe Reverb 112, Fender Bassman 410, VOX AC30 212, Fender Twin Reverb 212, Marshall 1960A, Celestion Greenback 412, Celestion Vintage30 412
(Note: All product names are trademarks of their respective owners, which are in no way associated or affiliated with NUX. These product names, descriptions and images are provided for the sole purpose of identifying the specific products that were studied during NUX's sound model development. ) 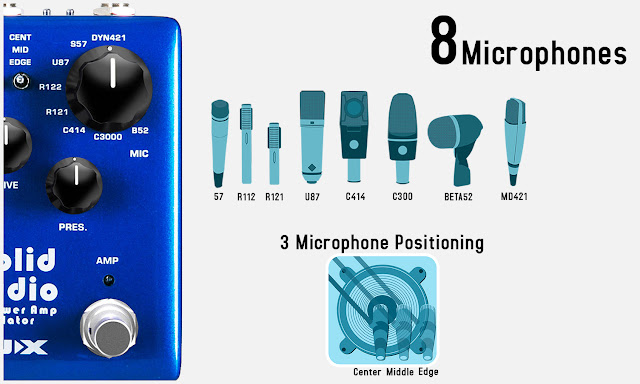 (Note: All product names are trademarks of their respective owners, which are in no way associated or affiliated with NUX. These product names, descriptions and images are provided for the sole purpose of identifying the specific products that were studied during NUX's sound model development. ) 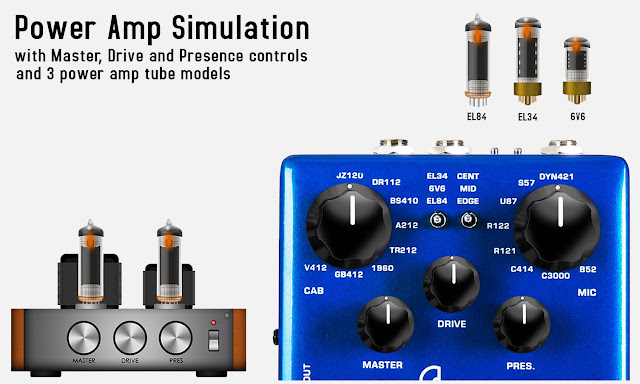 Three kinds of power-tube selection and power amp simulation with the algorithm of vacuum tube post-distortion and state compression characteristics.  Among them, the Drive can be regarded as the Bias used to force the post-distortion. 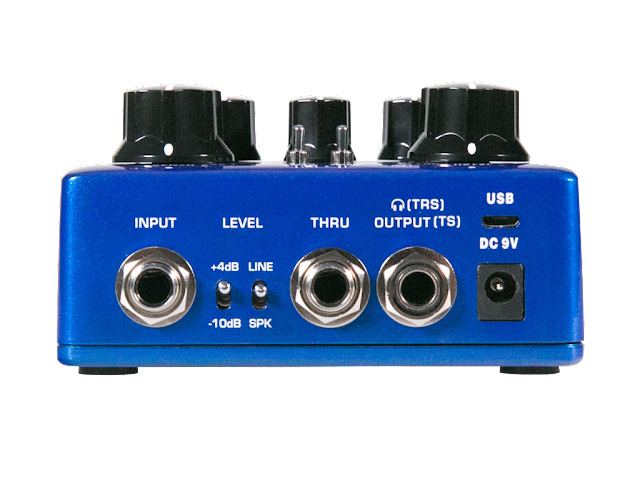 What are the +4dB and -10dB selector switches on Solid Studio?
Many people feel that the Level switch does not respond. Is it defective or design flaw? Want to make it clear that this matter goes back several decades.

Professional camps use +4dB as the reference input level, while specifying a headroom of at least 10dB. Converting to easily understandable data uses 1.23V as the reference signal strength, and the device can handle at least 20V signals.
The amateur camp uses -10dB as the reference input level, and the dynamic headroom is about 10~20dB. Converted into easy-to-understand data is 0.316V as the reference signal strength, the device can handle 6V signal.
Looking at the above explanation, we can understand that these two levels are the signal strength that the system can bear. If two systems are all inputting 1V signals, both systems will also output 1V signals at the end (assuming that the two systems are only Doing storage and transmission) This is why the level switch is toggled but there is no real reason for "reaction".
Since the professional +4dB level can withstand higher voltages, why does Solid Studio also set the switch to select two reference levels? This involves the problem of noise. The obvious difference between the current digital system and the current year's analog equipment is that the withstand voltage is relatively low. The signal needs to be attenuated a large part before entering the digital system and then amplified back after being output to the digital system. The larger the amplified value, the greater the noise of the digital system itself. The +4dB file is larger than the -10dB file and the noise is also louder.
So when we put the signal of the guitar and the effect pedals into Solid Studio, we can use -10dB to ensure the best signal dynamics and noise level. When we use the Send signal of several rack effects or vacuum tube amplifier in Solid Studio, we can use +4dB to ensure that the signal does not overdrive.

Is there the simplest operation method? That is, stay on -10dB until you feel that Solid Studio is overloaded and switch to +4dB.

First listen to see how the sound?

Next time let’s talk about “IR Capture”.
Posted by nuxefx