Something you should know about 2.4GHz wireless in 2020

Pete Thorn wrote a review Tone Tips: Going Wireless in 2018 on Premier Guitar, he also mentioned our NUX B-2 wireless.

As a modern musician, we have to know wireless more. So let's talk some basic knowledge about 2.4GHz and wireless.
Wireless is becoming more and more popular for musical instruments, but we have to know wireless is divided into UHF and 2.4GHz.
First let's talk about UHF-Ultra High Frequency. In fact, 2.4G is also included in this frequency band. But 2.4G we mean ISM, which is the universal channel. At present, 2.4G is a universal channel that is open all over the world, and UHF must apply for a license according to the frequencies opened by governments of all countries.
This is why major brands have begun to move to 2.4GHz.
The most difficult point for 2.4G to overcome is how to avoid the interference of the WiFi router, overcome latency issue, and transmission length.

The working principle of 2.4GHz.

Shure cut the 2.4GHz band into 19 bands (NUX B-5 also cut into 19 bands), avoiding the 3 bands with strong interference from WiFi devices and the 1 band used by the pairing code, so selected 15 bands for working.
Professional 2.4GHz private protocol bandwidth is usually 2MHz (worse digital compression probably use 4MHz bandwidth), plus 1 MHz of Ramp Up / Down, 4MHz bandwidth is required. 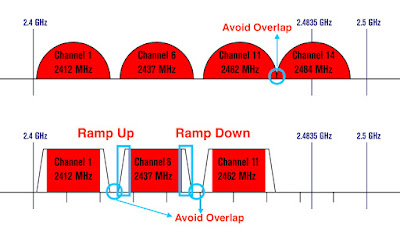 As for frequency band cutting and data packet size, there is a considerable relationship between bandwidth. It can be known from the above that the digital compression algorithms of Shure and NUX are quite powerful, and the data packet can be processed very small. The most difficult thing for wireless transmission of musical instruments is how to compress the data packets small enough to keep high-fidelity sound reproduction. This is also the biggest difference between this generation of NUX B-5RC and the previous generation NUX B-2, so it can effectively reduce the power at the transmitting end and solve the problem of high-frequency interference noise of active pickups.

The sharp-eyed friend may realize that when Shure is in Group1, the system latency is the shortest, which is about 4ms. But in other groups, the system delay came to 7.3ms.
Because Shure uses FPGA instead of DSP, the latency of the arithmetic unit will be shorter than that of NUX B-5 using DSP. (Shure can achieve 4ms in Group1, NUX B-5 < 5ms)

The method in Group1 is that each channel of the transmitter uses 6 frequencies for transmission at a time (actually only 3 frequencies work, for example, 2424 and adjacent 2425 actually only have one transmitting, and at the same time, transmitting and receiving will detect the current working environment evaluates whether automatic frequency hopping switching avoids interference.), And the receiver only needs to receive a data packet of one of the three frequencies. At this time, the receiver does not return a signal to the transmitter, so only once transmission can minimize the latency. However, since there is no Protected Access, Shure uses 6 frequencies at a time to take into consideration the frequency hopping during work to avoid signal drop. (The more transmission frequencies, the lower chance of signal dropping, and the fewer transmission frequencies, the higher chance of signal dropping.)

Note: NUX also adopts the method of 3 transmitting frequencies but does not have frequency hopping during work (mainly considering that B-5's compact size,
low power consumption and standby time), while the Boss WL series and Line6 G10 only use two frequencies to transmit, so it will be more susceptible to interference than the B-5. Therefore, the signal stability is Shure GLXD> NUX B-5> Boss WL / Line6 G10.

The method of Group2 is to transmit at three frequencies + the receiver notifies the transmitter to hop:
Because this method is to inform the transmitter whether to switch frequency hopping through the receiver, the system latency comes to 7.3ms.
But the advantage is that the probability of missing data packets is lower than that of Group1. So it is also the choice of the balance between latency and missing packets.

Group3's approach is to transmit at 2 frequencies + the receiver notifies the transmitter to hop:
For example, Group3 / Channel1 uses 2415, 2416, and 2443. In fact, only one of 2415 and 2416 transmitted, and 2443 is transmitted in sequence. At this time, the receiving end only needs to receive one data from them. If the current 2415 will drop the packet, the receiver will notify the transmitter to jump to frequency 2416 to work.
The biggest difference between Group3 and Group2 is to sacrifice the chance of dropping packets to meet the possibility of 8 groups of devices working at the same time.

The method of Group4 is similar to the Bluetooth communication protocol. It adopts the method of cyclic transmission. The advantage of this method is that the possibility of dropping packets is minimal, but the disadvantage is that the system latency is very long. And this makes it impossible to work with other equipment at the same time.
So Group 2, 3, 4 is the choice between "the quantity of simultaneous working groups" and "the probability of dropping packets."

Therefore, the 2.4GHz wireless system is a kind of trade-off between "signal strength", "transmission distance", "pickup noise interference", and "digital compression algorithm to reduce bandwidth" and "keeping high-fidelity sound quality".
The most difficult part is the "digital compression algorithm", because this product can be called a "professional product" only if it can effectively compress the packet and keep high-fidelity sound quality.

Moreover, it comes with the ground-breaking auto-matching system which allows you to enjoy complete freedom without any setup. Enjoy, have fun & rock on. 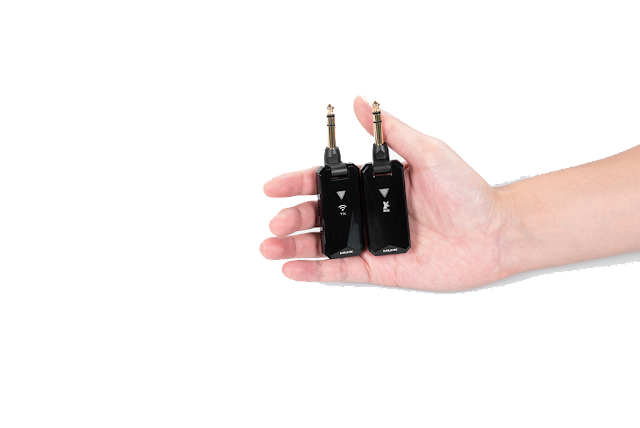 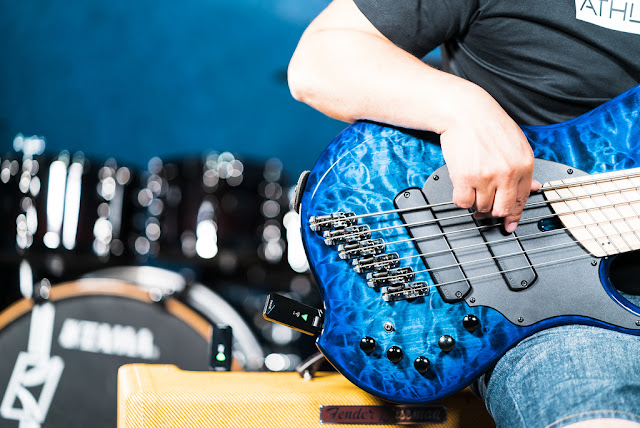 Forgot about the channel-matching thing, B-5/B-5RC can work straight out of the box. Just turn on both the transmitter and the receiver, plug them to your guitar and amp accordingly, and you’re good to go. 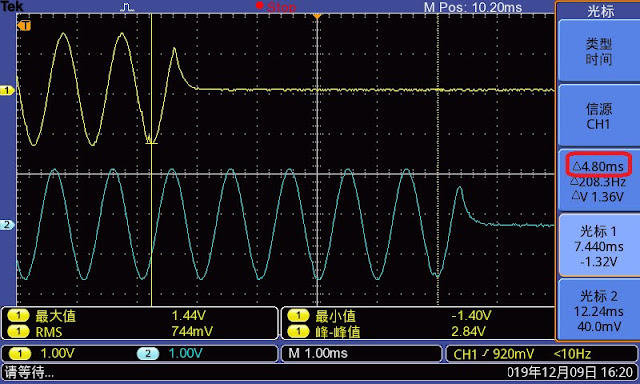 Note: Generally speaking, the system noise of excellent audio equipment is acceptable within -120dB. (Probably 10uV) And the white noise like a guitar amplifier is basically larger than the B-5. 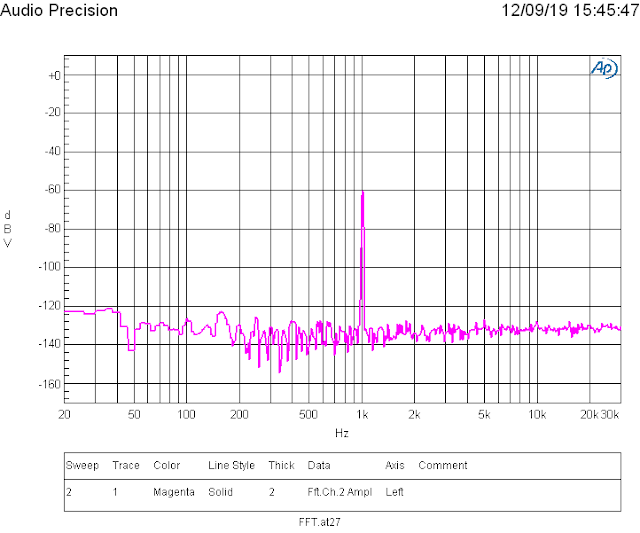 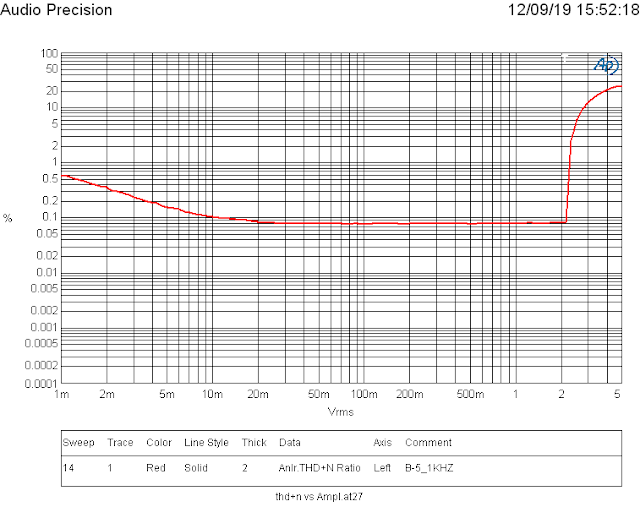 Optional Cable Tone simulation
The B-5RC provides Cable Tone simulation of about 3 meters length. After turning on the power, as long as the receiver button is pressed briefly, the indicator light turns orange to represent Cable Tone.
The pink line is the frequency response curve of the Cable Tone, and the red line is the frequency response curve of the normal mode.
Compared to the Line6 G10 fixed type, which can't choose to engage or disengage the Cable Tone, and Boss also distinguishes between WL-20 and WL-20L models with or without Cable Tone, the NUX B-5RC is very friendly. 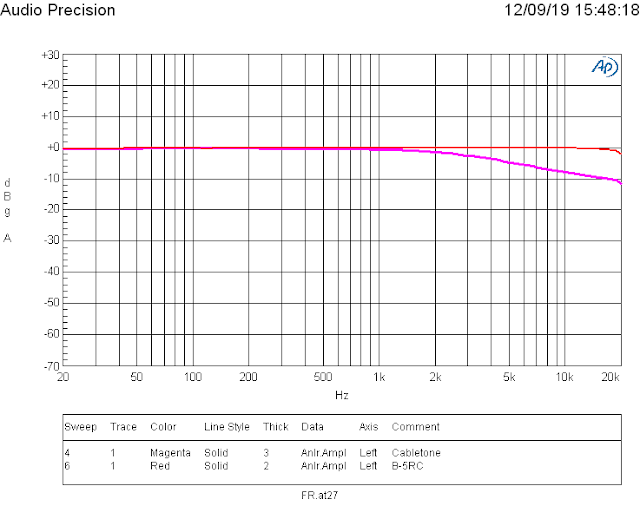 All types of guitar jack friendly

Comparison Chart
What's the difference between B-5 , B-2 and others? 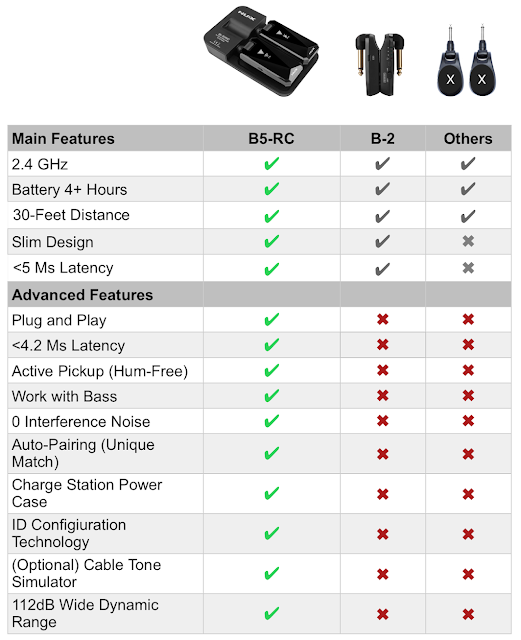 NUX B5-RC works like a guitar cable but offers wireless freedom. Setting up the system is simple: choose your channel on the Transmitter & Receiver, and is ready to go. 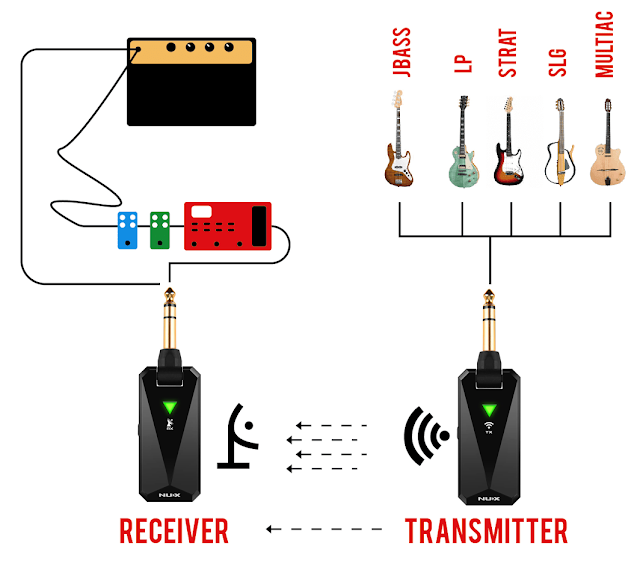 BUYING LINK for US.